Life At The Moment

We've been in Houston since Thursday running errands, making phone calls, hanging with family and friends, and running more errands.  We've closed bank accounts, canceled a cell phone number, and reorganized our stuff (again) for storage.  It's been very logistically heavy and it's going by pretty dang quick. It's kinda hilarious to explain to the sweet woman at Verizon that we don't really have an address, that we don't need two cell phones and that we want to suspend the one we do keep.  We've made piles of gear and clothing, evaluated them, split them in half, reevaluated and split them again. Here's just some of the madness: 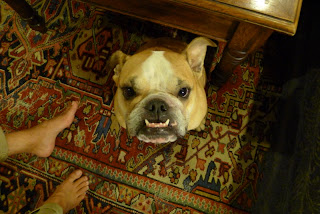 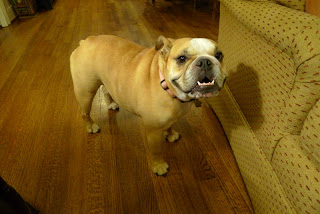 This is Abbey. She is my parent's bulldog.  She's quite possibly the most hilarious animal on the planet and a pretty fun distraction.

Anywho, it's the final countdown folks. Got any advice for these two travelers? Any gear/clothing you can't travel without?
POSTED BY Maggie
Labels: abbey dog, advice, family, houston, organizing, packing, repacking, travel

Hey y'all, leave us some love!